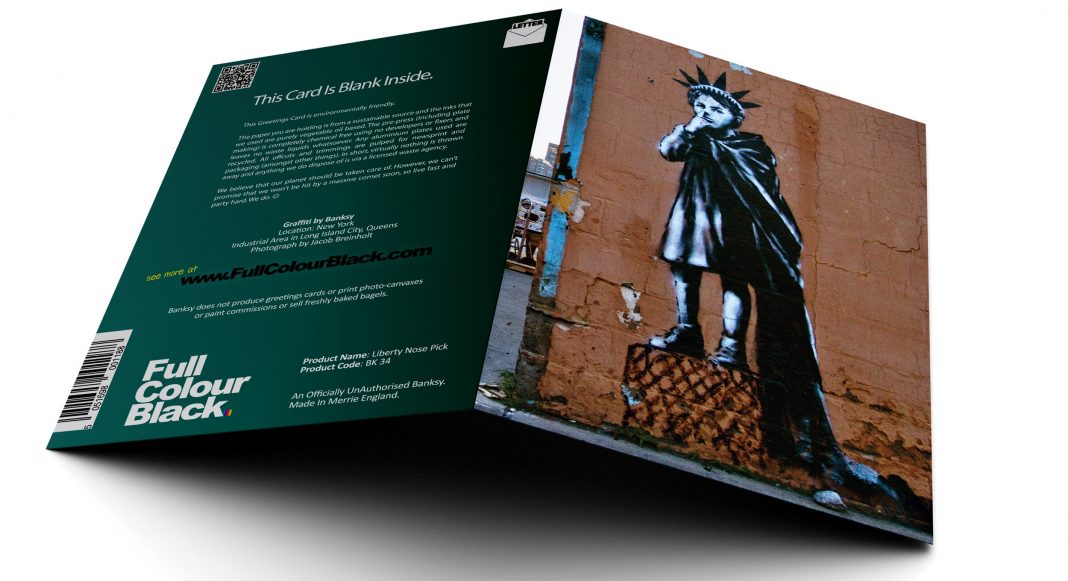 Banksy’s representatives, Pest Control Office, successfully applied for an EU trademark of the Flower Thrower in 2014, but after a two-year dispute this has been overturned.

Originally appearing in Jerusalem in 2005, the work depicts a masked man about to throw a bunch of flowers. Full Colour Black sell a range of cards that feature work attributed to the artist. They argued against the trademark because it was not being used, adding that Banksy himself had written in one of his books that “copyright is for losers”.

In 2019 Banksy opened a physical pop-up shop in Croydon, Gross Domestic Product, to sell his merchandise. At the time the artist claimed the shop was opened because of the trademark dispute but the EUIPO was critical of the move.

In their decision the EUIPO stated, “It was only during the course of the present proceedings that Banksy started to sell goods but specifically stated that they were only being sold to overcome non-use for trademark proceedings and not to commercialise the goods.”

Banksy’s anonymity also went against him in the case with the EUIPO saying, “He cannot be identified as the unquestionable owner of such works as his identity is hidden…The contested (trademark) was filed in order for Banksy to have legal rights over the sign as he could not rely on copyright rights, but that is not the function of trademark.”

Tania Clark, partner and trade mark attorney at European intellectual property firm, Withers & Rogers, said, “The law in this area is clear that an individual can’t just file a trademark application to protect their identity, or in this case artworks, without being able to prove a genuine intent to use them commercially.

“Banksy has shown disdain for intellectual property protection in the past and indeed his webpages of 2010 to 2011 declared that his works could be freely downloaded and used by anyone and he had no intention to benefit commercially from their use.

“Banksy may be having second thoughts about his approach to intellectual property protection, as this ruling now means that some of his trade mark registrations potentially could be invalidated and used by others.”

Pest Control Ltd and Andrew Gallagher of Full Colour Black were approached for comment but have not responded at the time of publication.

retailTRUST Calls On The Industry