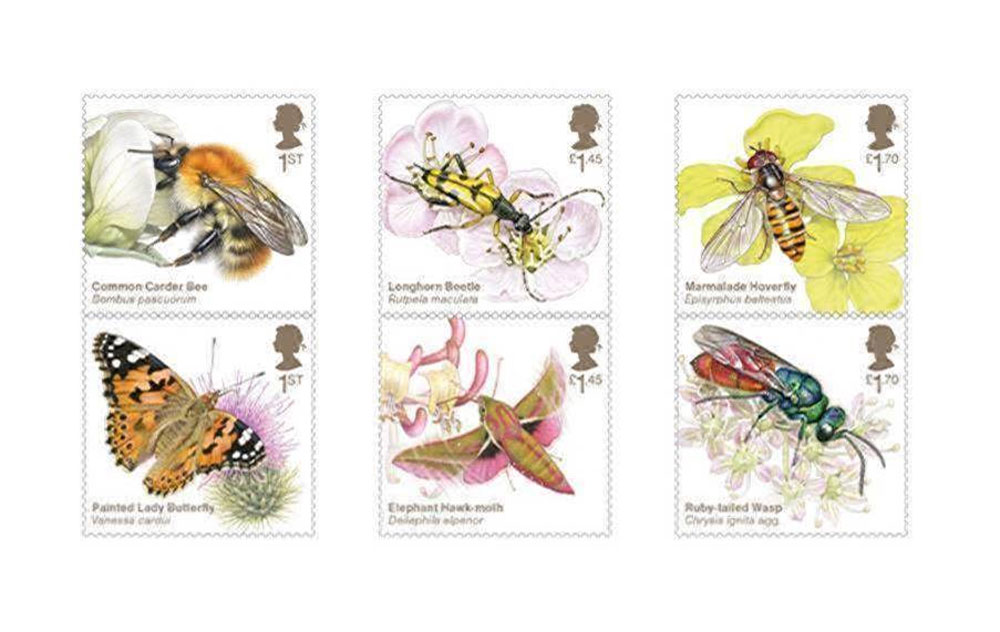 Royal Mail has launched a set of six stamps that celebrate the diversity, intrigue and importance of insects which pollinate plants in the UK.

The stamps explore insects – including bees and butterflies â€“ and other important pollinators such as moths, beetles and wasps. Pollinators are responsible for pollination of vast quantities of food crops for humans and farm animals and the pollination of wild plants including flowers and some trees. Of all plants worldwide, more than 85% are pollinated by insects and other animals.

Royal Mail worked with ecologist and entomologist Professor Helen Roy MBE, from the UK Centre for Ecology & Hydrology, on the stamp set. Professor Roy said, â€œInsects are captivating, and I was delighted to be invited to join Royal Mail in celebrating insect pollinators.â€

The stamps were illustrated by Oxfordshire-based, renowned wildlife artist, Richard Lewington. Richard said, â€œAt a time when the plight of insects as pollinators has much been in the news, I was delighted to be commissioned by Royal Mail, to highlight the importance and incredible diversity of â€˜Brilliant Bugs.â€™â€

Philip Parker, Royal Mail said, â€œOur exquisite new stamps depict colourful insects feeding on some of the flowers they frequent. We mark the vital role they play in pollinating wild flowers and crops: from bees and butterflies to the often-underappreciated work of hoverflies, moths, wasps and beetles.â€

The stamps and a range of collectible products are available from today atÂ www.royalmail.com/brilliantbugs