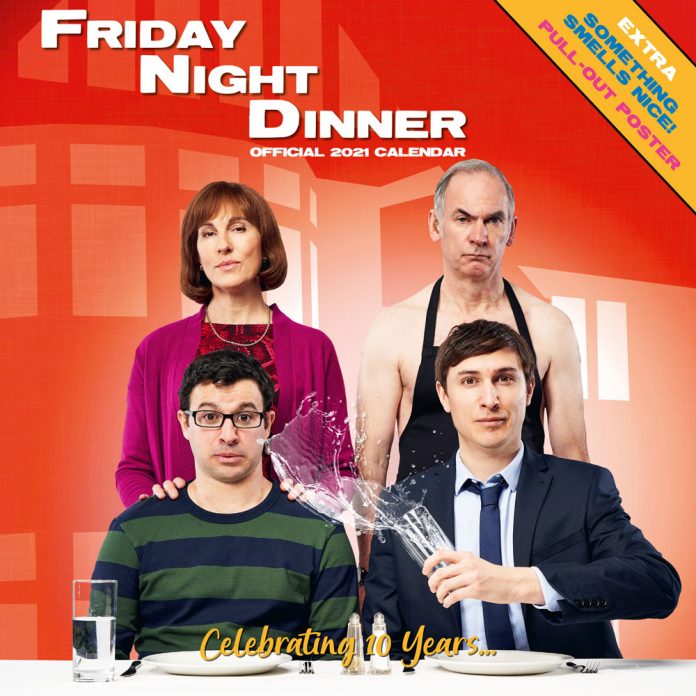 TV Comedy Friday Night Dinner has its first ever calendar.

The critically acclaimed and multi-award-winning comedy, Friday Night Dinner, is to feature in its first ever official calendar. Published by Danilo Promotions Ltd, this official calendar is available to buy now via Calendar Club, Amazon and danilo.com. Â

Created by Robert Popper, Friday Night Dinner is one of the most-loved comedy shows on TV. Featuring a stellar ensemble cast including Tamsin Greig, Simon Bird, Paul Ritter, Tom Rosenthal, and Mark Heap. Friday Night Dinner is an original series about growing up but not growing away. Each episode takes place over the course of a Friday night, as brothers Adam (Bird) and Jonny (Rosenthal) go around to their parents’ house for dinner. The series first aired on Channel 4 in 2011 and since then has produced six series with 37 episodes. The recent sixth series became Channel 4â€™s biggest comedy series in over a decade.

Dan Grant, Licensing Director at Danilo said, â€œFriday Night Dinner has become a firm favourite in our company, with its hilarious banter and brilliant characters. At its core, the show is about family and connections, bringing the household together, around a table. We are thrilled to be working with the team at Direct to Retail, exclusive licensing agency, Big Talk, Robert Popper and the Friday Night Dinner team to create these new products.â€