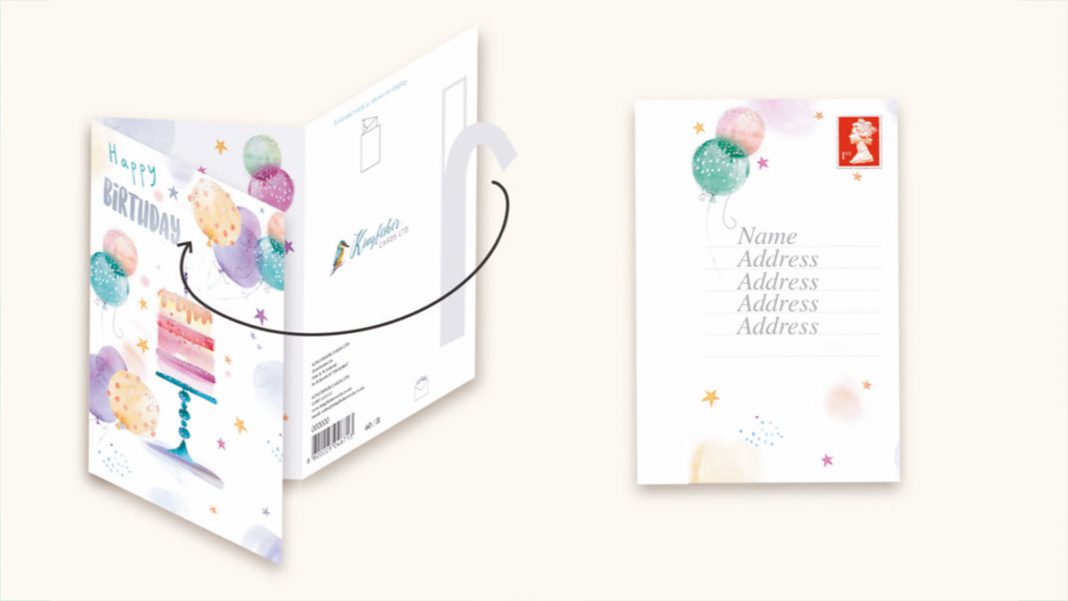 Derren Seal has come up with an eco-friendly alternative to the card and envelope combo, and explains how it became a family affair:

â€œHaving spent most of my working career in a sales-based environment, I gained my first role in the greeting cards industry around 2010 working for Cherry Orchard Publishing. I can honestly say I never believed anyone could have so much fun and earn money at the same time!  But selling greeting cards has allowed me to meet some fantastic people from both publishing and the retail sector.

It was during this time as a sales rep that I first had the idea for Envelopd – the one thing about being a rep on the road is that you get an awfully long time between appointments to think!

There seemed to be a common gripe among the retailers that I visited â€“ envelopes! Each card created by different publishers is of differing dimensions, requiring a specifically-sized envelope to match. Some envelopes are more appealing than others and customers sometimes like to choose an alternative envelope from the rack rather than the assigned one. Envelopes often become detached from their cards, resulting in frustrated customers and retailers and – ultimately – wasted cards. Now that most retailers have gone cello-free to avoid using plastic sleeves to keep card and envelope together, the issues have magnified.

Publishers have tried various alternatives â€“ some have used a sticker to hold the card to the envelope, while others have opted for a corner clasp. But because this solution doesnâ€™t allow the customer to look inside the card, the sale could be lost or, worse still, the clasp or sticker is removed, leading to waste or damage.

I realised that an environmentally-friendly solution was needed that allowed customers to read the inside of the card and to enjoy a bespoke and appealing way to post their card. Rather than thinking â€˜outside the boxâ€™, I thought â€˜inside the boxâ€™ â€“ (or rather card!), to make the envelope element part of the actual card itself.

“My solution was to take a single-fold card and add a third leaf, which can be folded across to form the posting cover”

My solution was to take a single-fold card and add a third leaf, which can be folded across to form the posting cover. The third leaf contains a peel-away sticking element to seal the card and for addressing and postage. This patented innovation enables the design to cover the entire product and gives publishers the option to create numerous effects on the suitably-sized third leaf â€“ such as patterned, embossed, foiled and so on.

On receipt of the card, you simply peel open the front (no sticky residue is left) and neatly fold and stick this element back upon itself â€“ leaving your two-fold card ready to enjoy. Thereâ€™s no waste, itâ€™s simple and very effective!

Once born, this idea was brought to life by my daughter Lauren, who at the time was studying A-Level graphics and who is an extremely talented artist. She was able to create a professional mock-up card so that I could see the concept and we were then able to research how the peel-off sticky strip would work best. Many reels of differing double-sided stick tape later, we still couldnâ€™t find a suitable product and decided to hand this element over to the professionals!

My son Dan came on board to come up with inspiring tag-lines (Drop the E â€“ Save the Environment, Envelop the World, to name a few) â€“ but we finally settled on â€˜Envelopd â€“ Push the Envelopeâ€™ .

My wife and I discussed funding the patent ourselves and both agreed that the idea was well worth investing in. Feedback from family, friends and my retailer customers was very positive and encouraging â€“ many people wondered why such a simple idea hadnâ€™t been done before.

Paul Urban, of Kingfisher Cards, came on board as an investor, and Envelopd took a step closer to reality. The peel-off strip was still causing a headache â€“ we looked into many types of adhesives and have finally found one which is strong enough to survive the rigours of the postal system, yet gentle enough not to leave any residue on the front of the card on receipt.

Envelopd is UK patent protected (GB259228) and international patent application (WO2021/165638) pending. The goal is to license it to all publishers in the UK and beyond â€“ thus creating a more environmentally sustainable industry for the future.

Kingfisher Cards has produced a new card range showcasing the Envelopd solution, which will be launched at Spring Fair. Retailers will be able to line buy or order a full spinner at this event. Visit us at Stand 3N24.â€™â€™