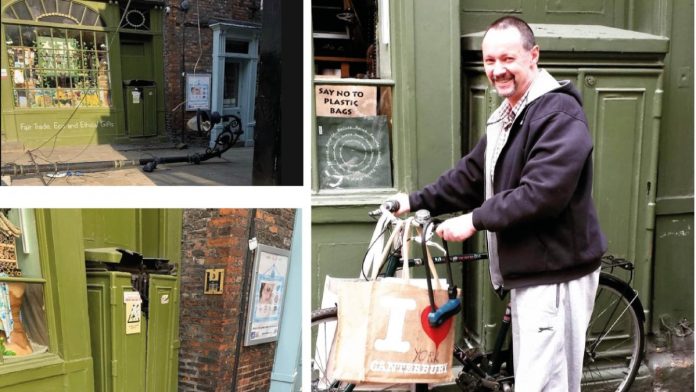 The manager of York shop Shared Earth had a narrow escape this week when a lamp post outside the shop was knocked down by a passing lorry.

The electricity box, in front of which he locks up his bicycle every day, was smashed open by the lamp post only 20 minutes before Jeremy Piercy arrived for work.

Jeremy started Shared Earth in 1986 as a small shop in Goodramgate, York. It moved to Minster Gates in 1991 and has now grown to the largest distributor of Fair Trade and eco products in the UK, with sales of nearly Â£4 million and increasing every year, as the public becomes more aware about the need to tackle climate change.

Shared Earth supplies more than 1,500 other retailers around the UK and will be exhibiting at the Natural & Organic Show in London next week.

York is of course a tourist city and Jeremy frequently shows passers-by where he locks his bike â€“ to an old â€˜foot scraperâ€™, which he believes dates from the 18th century. They were used when the streets of York were made of packed-down earth and people travelled on foot or by horse, so foot scrapers were essential at rainy times. Few are left now and Jeremy considers the one outside Shared Earth one of the â€˜unsung heroesâ€™ of tourist attractions.