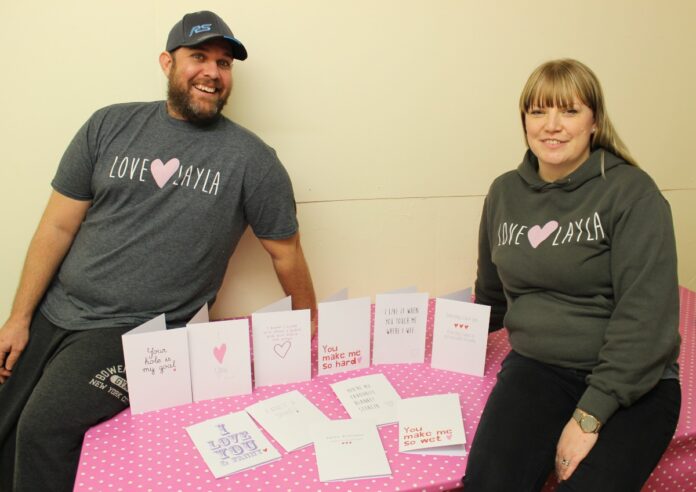 Greeting card company Love Layla Designs in Pontefract, West Yorkshire, has been selected as one of the nation’s 100 most inspiring small firms by the Small Business Saturday UK campaign.

The company, which designs and produces hilarious greeting cards and giftware was founded by Stacey and Jason Dennis (pictured) in 2014.

It has been chosen to be part of this year’s SmallBiz100 line-up, which showcases impressive, independent businesses from across the nation.

Now in its 10th year in the UK, Small Business Saturday will return on December 3 with a mission to support and celebrate the UK’s 5.5 million small businesses, particularly as they face mounting economic challenges over the winter.

Stacey said: “We are so excited and proud to be listed as a SmallBiz100 because we’ve worked super hard over the past seven years to still be here and as strong as ever. We are very proud to stand among other small businesses that have managed to survive a rollercoaster ride, and what a ride it has been!

“The challenge of starting a business and being new parents was our ride or die moment; it’s nice to stop and realise and recognise where we have built our business from. And still being married after seven years of working together is a bonus!’’

Love Layla Designs will be profiled by the campaign on 8 November as part of the 100-day countdown to Small Business Saturday UK.

“Over the past decade we have been able to spotlight dynamic businesses from across the nation, who remind us of the incredible tenacity and determination of small firms in this country. It’s brilliant to have Love Layla Designs in this year’s SmallBiz100 line-up.”

A grassroots, not-for-profit campaign, Small Business Saturday first came to the UK in 2013 has grown into an iconic campaign celebrating small business success and encouraging consumers to ‘shop local’ and support businesses in their communities.

The campaign was originally founded by American Express in the US. in 2010, and the brand remains the principal supporter of the campaign in the UK.

On Small Business Saturday customers across the UK go out and support all types of small businesses, from independent shops and restaurants to small service and b2b based businesses such as accountants and digital marketers. Many small businesses take an active role in promoting the day by hosting events and offering promotions.

Over the years the campaign has run in the UK it has engaged millions each year, with combined spend on the day topping over £1 billion.

Last year the campaign trended at number one in the UK on Twitter, with the Prime Minister, leader of the opposition and the Mayor of London among those publicly supporting the campaign.